Steven Savile is the best-selling writer you've never heard of (unless you've heard of him). He has written for countless well-known IPs, from Primeval to Doctor Who, as well as numerous original projects including the #2 eBook-charting thriller SILVER.


Sharkpunk: What, do you think, is the reason for people's enduring fascination with sharks?
Steven Savile: The easy answer, for my generation, I think, is JAWS. I can still remember my older cousin handing me a copy of Peter Benchley's novel when I was maybe 8 or 9 and saying it's the scariest thing he'd ever read. I sat in his bedroom listening to Spandau Ballet or Duran Duran or well, you get the picture, and read the opening shark attack and the description of the severed leg and the blood. Straight into nightmare territory and it's never gone away. You see National Geographic films in beautifully shot HD of this killer cutting through the deep blue and all you see, really, is muscle mass and razor sharp teeth. There's no reasoning with that kind of threat. It's almost elemental in its nature. A few years ago I did a Top Trumps book for Penguin, and the Great White was by far my favourite card. I loved scouring the research for fun facts about that particular beastie. Oh my word. So, yeah...

SP: What was the inspiration behind your story Swimming with the Fishes?
SS: Is this where I own up that I pitched Jon a completely different story to Swimming with the Fishes and right up to the point of stretching the deadline incredibly thin (remember that famous Douglas Adams quote about loving the sound of deadlines whooshing by?) finally sat down to write what I thought was going to be a very serious JAWS-like homage... and then... this voice took over and the first line hit the page, this unexpected noir-esque Godfather kind of thing, and I wrote to Jon saying 'Mate, I'm REALLY sorry...' and probably said a dozen times that I'd understand if he didn't want it, because I'd gone so far off the reservation I was pretty sure he'd never read anything like it and may not again... in terms of inspiration, several years ago I sold a story I'd co-written with a mate to Sony Entertainment of development as a possible TV series, and while it had got close, I've got the pilot scripts etc, it just never made it out the gate... well, that had the same kind of irreverent vibe and mash-up for classic horror tropes and, well, that was more like NYPD BLUE with Monsters... where Fishes became The Godfather with Monsters... and a very wicked sense of humour...

SP: What challenges, or surprises, did you encounter in writing your story?
SS: See Above. Nothing went as planned. Jon was expecting an entirely different story about a neolithic shark that had survived all these millennia and was attacking an oil rig... so the biggest surprise was when he said 'I love it!'

SP: If you had to pick a favourite shark, which would it be?
SS: I always had a soft spot for the Hammerhead... it's kinda like the Thing of the shark world... I imagine it turning around to its Great White and Basking Shark super-buddies and saying 'It's clobberin' time!'

SP: Do you have a favourite fictional shark (in books, comics, films, or video games)?
SS: It's got to be Jaws, it just has to be... that music, the unforgettable image of the fin cutting through the water...then the blood. Perfect. 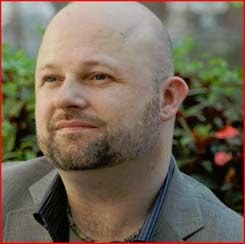 Steven Savile has written for Doctor Who, Torchwood, Primeval, Stargate, Warhammer, Slaine, Fireborn, Pathfinder, Arkham Horror, Risen, and other popular game and comic worlds. His novels have been published in eight languages to date, including the Italian bestseller L'eridita. He won the International Media Association of Tie-In Writers award for his Primeval novel, Shadow of the Jaguar, published by Titan, in 2010, and the inaugural Lifeboat to the Stars award for Tau Ceti (co-authored with Kevin J. Anderson). Silver, his debut thriller reached #2 in the Amazon UK e-charts in the summer of 2011. It was among the UK's top 30 bestselling novels of 2011 according to The Bookseller.  The series continues in Solomon's Seal, WarGod, and Lucifer's Machine, and is available in a variety of languages. His latest books include HNIC (along with the legendary Hip Hop artist Prodigy, of Mobb Deep) which was Library Journal's Pick of the Month, the Lovecraftian horror The Sign of Glaaki, co-written with Steve Lockley, and has recently started writing the popular Rogue Angel novels as Alex Archer, the first of which, Grendel's Curse, is out in May. He has lived in Sweden for the last 17 years. His online presence can be found at www.stevensavile.com.