Alec Worley is probably best known as a comics writer and film reviewer, but he is also a skilled prose writer, as is evidenced by his forthcoming story in the forthcoming SHARKPUNK...


Sharkpunk: What, do you think, is the reason for people's enduring fascination with sharks?
Alec Worley: The fascination, I think, is more to do with the myth we’ve created around sharks than the animals themselves. Great Whites are actually at a high risk of extinction in the wild due to trophy fishing and you’re more likely to be hit by lightning than eaten by a shark. Reality has nothing to do with the reputation we’ve built for them. Sharks have become this symbol of our fears about the natural world, and, I guess, are a reminder of our vulnerability in the face of an element that covers 71% of our planet. Then there's our uncertainty about the future of the natural world and our place within it. Scientists are limited in what they can observe in sharks and this just adds to their mystique. I mean, even the name sounds cool: Sssssssh-arrrrrgh! Kkkkk! Death in miniature.

SP: What was the inspiration behind your story, Sharkcop 2: Feeding Frenzy?
AW: I had an idea for a story that began with someone waking up naked on a beach somewhere and with no idea how they got there. Are they a shark that’s turned into a person or a person that can turn into a shark? But the story ended up turning into a comedy, specifically a send-up of '80s buddy cop movies. I just wanted to write something that made me giggle as much as possible while still telling a solid story, as well as maybe getting into why we find sharks so cool.

SP: What challenges, or surprises, did you encounter in writing your story?
AW: I always seem to find comedies harder to write than straight drama. I’ve found this writing Robo-Hunter and Dandridge for 2000 AD. I end up spending hours agonising over whether ‘dog’ is funnier than ‘warthog’ or whatever. You have to get that tone just right, which is really hard.

SP: If you had to pick a favourite shark, which would it be?
AW: Megalodon or a giant octopus with a Megalodon head on the end of each tentacle.

SP: Do you have a favourite fictional shark (in books, comics, films, or video games)?
AW: I’m fascinated by Bruce the mechanical shark from Jaws. Physical special effects like that just mesmerize me and I love the story behind what happened to the three mechanical Bruces. Two were left to rot on the Universal backlot while another ended up as a mascot in some California auto-junkyard. There’s a real ‘uncanny valley’ thing going on for me there, like they’re somehow both objects and living creatures.

SP: Apart from your story in Sharkpunk, what's coming next from Alec Worley?
AW: Nothing I can really talk about right now as they haven’t been announced. But more Judge Dredd and Dandridge from 2000 AD, hopefully, and more Judge Anderson for Abaddon Books. 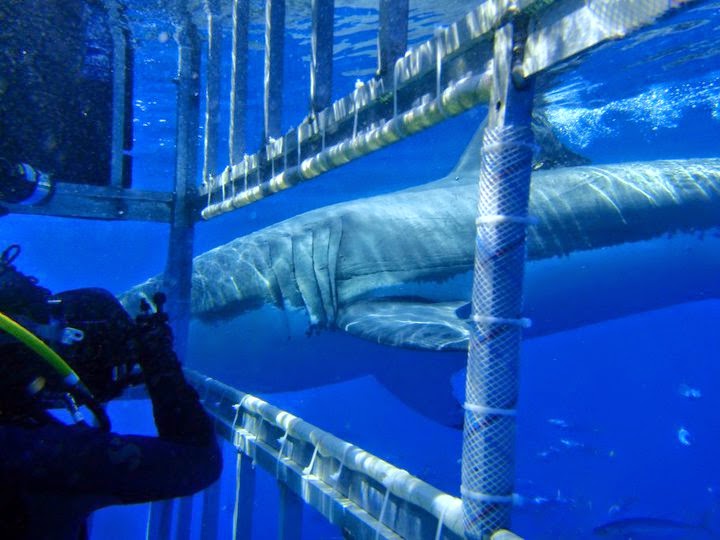 Alec Worley was a projectionist and a film critic before he got to write for legendary British anthology comic 2000 AD, for whom he’s written Judge Dredd, Robo-Hunter, Age of the Wolf and Dandridge. His prose credits include the Judge Anderson: Rookie series for Abaddon Books. His lifelong love of sharks began when he saw Jaws at the age of 7 and fell off his chair in fright at the bit with Ben Gardener’s head. More recently he achieved a lifelong dream of going cage-diving, which he did off the coast of Guadalupe, Mexico. He got pooped on by a Great White.