Sharkpunk: What, do you think, is the reason for people's enduring fascination with sharks?
David Tallerman: They make great pets.

SP: What was the inspiration behind your story The Shark in the Heart?
DT: See above. And more specifically the idea, apparently out of nowhere, of what would happen if a child got a shark as a pet instead of the usual puppy/kitty candidates - and just how badly that could go. It began as sort of a gangster story with kids, but ended up as something quite different.

SP: What challenges, or surprises, did you encounter in writing your story?
DT: The Shark in the Heart changed in tone a lot while I was writing it. It started out quite funny, and then suddenly it wasn't. Then it was again, but a different kind of funny. Also, writing a child protagonist is not at all easy, especially when they have to be sometimes childish and sometimes quite adult depending on the demands of the narrative. I think that kids are actually capable of making those switches, but that doesn't necessarily make it plausible for a reader, so you have to be careful.

SP: If you had to pick a favourite shark, which would it be?
DT: I like hammerheads. Once upon a time, there must have been fish that were like little nails, right? But presumably those went extinct, and now those poor hammerheads are just floating around, feeling nostalgic about geological ages past. Also, they had to do all that hammering with their own eyeballs, which can't have been much fun.

SP: Do you have a favourite fictional shark (in books, comics, films, or video games)?
DT: At the risk of cheating slightly, can I vote for Kevin Spacey in Swimming With Sharks? At any rate, that's my favourite shark-related movie.

SP: Apart from your story in Sharkpunk, what's coming next from David Tallerman?
DT: I have a collection of short horror stories currently known as The War of the Rats and Other Tales due from Spectral Press in August. I've a novella, Patchwerk, coming out from Tor.com at the beginning of next year. And there are quite a lot more short stories on the way over the next few months. 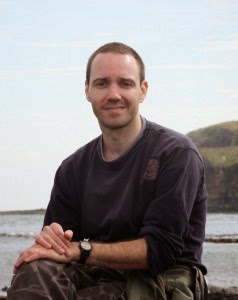 David Tallerman is the author of the comic fantasy novels Giant Thief, Crown Thief and Prince Thief and the absurdist steampunk graphic novel Endangered Weapon B: Mechanimal Science. His first short story collection, The War of the Rats and Other Tales is due for release in August from Spectral Press; his first novella, Patchwerk, will come out early in 2016 from Tor.com.

David's short science fiction, fantasy and horror has appeared or is forthcoming in around seventy markets, including Clarkesworld, Nightmare, Lightspeedand Beneath Ceaseless Skies. He can be found online at www.davidtallerman.co.uk and www.davidtallerman.blogspot.com.